It gives me immense pleasure to broadcast a Rover Service Activity undertaken on Sunday 8th April 2012.

Our Rovers were called in to help move a 4 storey scaffolding at Kappawala Agiary. The 50 foot scaffolding was built around the eastern side of the agiary to clean the agiary facade and was needed to be shifted across the entrance of the agiary in order to clean western frontal facade. Dismantling and rebuilding the scaffolding would have taken a long time and lot of effort – and it was then that our Rovers were called in, literally the night before, to help move this mammoth structure using their brains, brawn and bravado.

A "Service" SMS/Facebook update was sent to a band of rovers who responded positively and a 6 member team was ready for Service on Sunday morning. 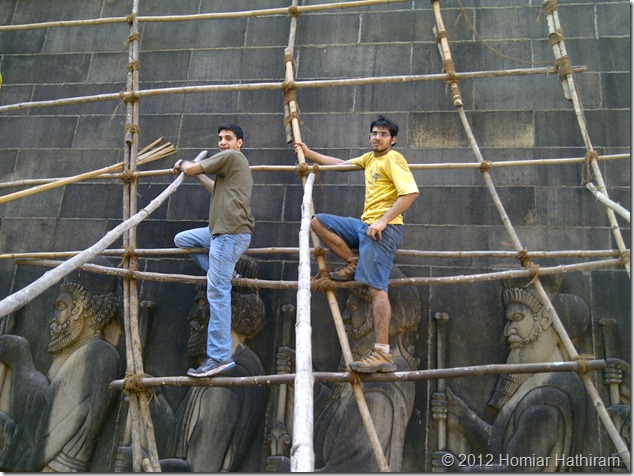 With the scaffolding now shifted, the Rovers lashed it firmly onto the agiary gate to provide a safe and secure platform for the cleaning volunteers.

The WZO secretary, Mehernosh Zaveri, and Panthaky Jamshed Bhesadia, thanked us profusely and appreciated our speed, skill and above all responsiveness to his request made just a night ago.

We thank our Rovers, mentioned below, for rising to the call of service.

“Action springs not from thought, but from a readiness for responsibility”

and our Rovers underscored that on Sunday.