CELEBRATIONSFOR THE GOLDEN JUBILEE OF ITS SEA SCOUT TROOP (Est. In 1962) 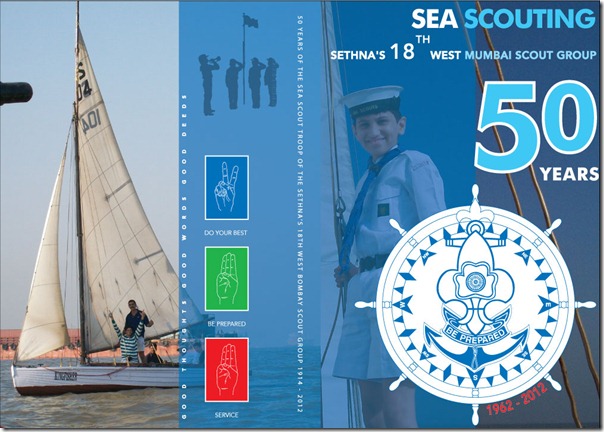 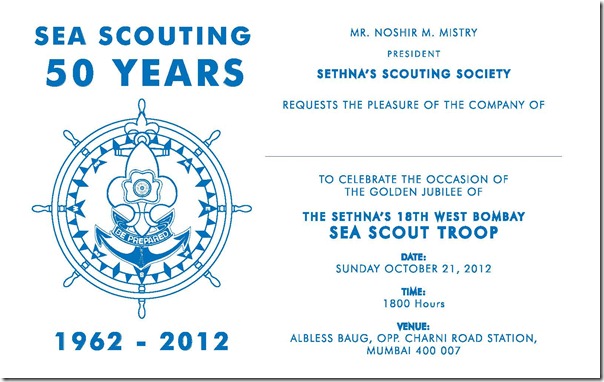 2. Over and above giving training to the boys in scout craft, great attention is paid in inculcating and imbibing traits like cleanliness, honesty, brotherhood, team spirit, obedience and leadership. In the Sea Scout Troop the training also includes sea faring activities and seamanship.

3. From the very beginning the annual fees and camp fees for the boys have been kept low and affordable. All the Scout Masters, Cub Masters and Instructors have always come up from the ranks in the Group and give absolutely free service. From 1914 till date, thousands of boys have passed through the portals of the Group and many have achieved distinction in their vocational and professional careers and are indebted to the Group for the good qualities imbibed by them during the course of their scout training.

4. The Scout Group is managed by the Sethna’s Scouting Society which was earlier known as the Parsee Scouting Society. The Society is registered under the Bombay Public Trusts Act, 1950 as also under section 12A of the Income Tax Act, 1961 and donations to the Society qualify for a deduction under section 80 G in the hands of the donor. The Managing Committee of the Society is formed of elected members and a representative each from the different sections of the Group. The present office bearers are

5. It is a rarity for any voluntary organization to thrive and complete 50 and 100 years of active and continuous service and today we are proud to be members such a great and efficient organization. It has therefore been decided that both these unique occasions, the Golden Jubilee of the Sea Scout Troop and the Centenary of the Scout Group, be celebrated in a befitting manner. The function for celebrating the Golden Jubilee of our Sea Scout Troop is going to be held on 21st October 2012 at Albless Baug, Charni Road, Mumbai.

6. In order to celebrate our centenary we are planning to hold a celebratory function and publish a volume depicting our history and achievements. We have therefore to request any person, past member or otherwise, who has any information, material or photographs about our Group and its activities to get in touch with our representatives whose contact details are given below. We shall return the material / photographs after we have done with them. Please also visit our website www.sethnas.org.